On August 16, 2018, Aridis completed its initial public offering of 2.2 million shares of its common stock which included an overallotment of 192,824 shares that was exercised on August 30 resulting in net proceeds of approximately $25.1 million. As of September 30, 2018 Aridis had cash and cash equivalents of $34.1 million, which management believes is sufficient to fund operations into 2020. These resources are expected to enable the Company to advance its multi-product clinical pipeline toward the achievement of key clinical milestones in 2018 and 2019.

"We are very pleased to have successfully completed our recent IPO and are grateful to our new and existing investors for their enthusiastic participation and continued support," said Vu Truong, Ph.D., Founder and CEO of Aridis. "The proceeds from the IPO will enable us to advance our clinical and preclinical pipeline of novel, fully human, anti-infective monoclonal antibodies targeting serious, potentially life-threatening infections toward near-term clinical milestones, including initiation of the AR-301 Phase 3 clinical study around the end of this year."

Dr. Truong added, "We believe that the future treatment of life-threatening infections, such as hospital-acquired pneumonia (HAP) and ventilator-associated pneumonia (VAP), will shift toward a targeted approach, using drugs that are specific to just the pathogen that is infecting the patient, rather than drugs that induce a broad spectrum killing effect such as the current standard of care antibiotics. We are pleased that patient enrollment in the global Phase 2 clinical study evaluating AR-105 for the treatment of VAP is steady as expected. Thus, we remain on track to report top-line data from this study in mid-2019."

Unlike current antibody therapies being developed for infectious diseases, Aridis' mAbs are completely of human origin, functionally optimized for high potency by the patient's immune system, and do not require genetic engineering or further optimization to achieve full functionality and high mAb productivity. This technology also allows for the selection of any antibody isotype, depending on the optimal effector function required for treating the target infection. Bypassing the humanization, binding sequence optimization, and generation of genetically engineered antibody producing cell lines allows for a much faster progression to clinical development compared to other companies developing antibody therapies.

Certain statements in this press release are forward-looking statements that involve a number of risks and uncertainties. These statements may be identified by the use of words such as "anticipate," "believe," "forecast," "estimated" and "intend" or other similar terms or expressions that concern Aridis' expectations, strategy, plans or intentions. These forward-looking statements are based on Aridis' current expectations and actual results could differ materially. There are a number of factors that could cause actual events to differ materially from those indicated by such forward-looking statements. These factors include, but are not limited to, the timing of regulatory submissions, Aridis' ability to obtain and maintain regulatory approval of its existing product candidates and any other product candidates it may develop, approvals for clinical trials may be delayed or withheld by regulatory agencies, risks relating to the timing and costs of clinical trials, risks associated with obtaining funding from third parties, management and employee operations and execution risks, loss of key personnel, competition, risks related to market acceptance of products, intellectual property risks, risks associated with the uncertainty of future financial results, Aridis' ability to attract collaborators and partners and risks associated with Aridis' reliance on third party organizations. While the list of factors presented here is considered representative, no such list should be considered a complete statement of all potential risks and uncertainties. Unlisted factors may present significant additional obstacles to the realization of forward-looking statements. Forward-looking statements included herein are made as of the date hereof. Aridis does not undertake any obligation to update publicly such statements to reflect subsequent events or circumstances. 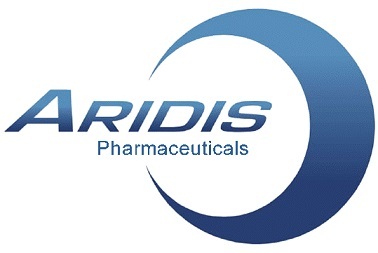